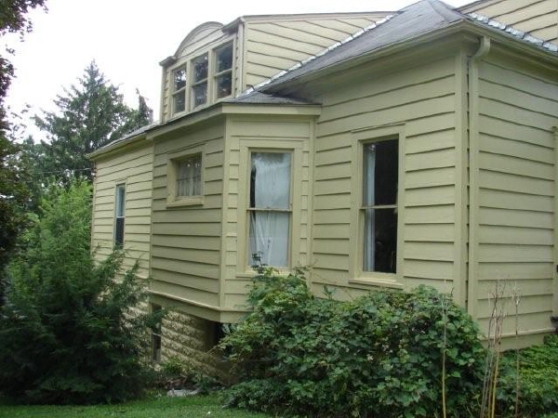 I thought the rhododendron at the northwest corner of the house was just badly situated, even though houses all along our street have thriving rhododendrons in the same position. Then I found this picture from the inspection.  What appears to be a healthy mass of shrubbery here is actually several rhododendrons completely covered in grape vines, and sharing the space with box elder volunteers. (You can also see the sun gleaming on the old flashing.)  I don’t remember, but Robert must have removed the grape vines in the first great clearance project.

Last year, I waited impatiently to see if it was a native rhododendron (which is the state flower), or one of the Himalayan imports, many of which are a fluorescent lavender that I find garish.  There were just two clusters of blooms, on nearly naked branches, and they were the pale pink and white of the species, although this is probably a hybrid or named cultivar.  There has not been a tremendous burst of foliage, but there are a dozen or more bloom clusters this spring.  We will leave it be and see how it does; it is visible from the front parlor, where Robert has his desk, and the library.

Last spring we planted half a dozen under the spruces and hemlocks at the back edge of the property, where they seemed to be happy.  The deer were delighted, and ate them down to twigs.  At least two survived, barely, but won’t be blooming this year.