When we moved in, we had a good bit of important mail expected, like our first pension payments, which for reasons we still don’t understand, had to be mailed rather than direct-deposited.  We had been looking forward to mail through the brass mail-slot, an old-fashioned thing we had previously only seen in movies.  But alas, the postman slipped only one item through that slot – a notice that we had to have a mailbox by the sidewalk.  We put it in this rather grubby corner at the front gate.  In March, deliveries stopped, and eventually resumed by the end of May, after the incident got AP coverage which was picked up worldwide.

Along about then, we dug up the weeds by the gate, and planted a little garden: lavender, yarrow, a daylily, and some iris transplanted from the bottom of the garden, where they were languishing in heavy shade.  The lavender flourished, blooming all summer, staying beautifully blue-green all winter, and surviving the snow and the chemicals from the removal thereof.   The scent is a pleasure when going past or checking the mail.

Now the iris are blooming, the lavender and yarrow are putting out new leaves, and we have added another patch of lavender, yarrow, and daylily on the other side of the gate, with another iris we found still languishing. 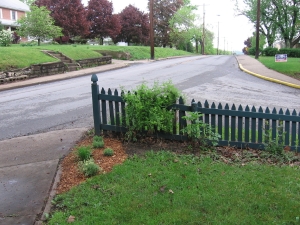