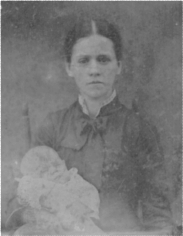 This is my great-grandmother, Elizabeth Ann Stalnaker, at 19, holding her second-born, Romeo Hersman.  Her first-born, Harvey, died the day before Romeo was born.  He was not quite two.  She went on to have another son, Bruce, and then five daughters, my grandmother Maud the eldest.  Married at 17, she was just 32 when she died of tuberculosis; Maud was 10 and Allie, her youngest, not yet two.

Our family still owns the land her house stood on, called Sugar Run, at Speed, Roane County.  No-one has lived there since she died in 1895.  Her children went to their grandparents and aunts.  My great-grandfather had an affair with her sister that resulted in a child he raised, moved across the ridge to a farm he named Limberlost, eventually remarried, and served in the state legislature.

Elizabeth Ann’s great-great-grandparents read like a Who’s Who of West Virginia’s first settlers: Stalnaker, Radcliff, Hughes, McWhorter, Hurst, Waggoner, Bonnett, Hardman.  Most of her great-grandparents grew up in the forts of Harrison County during the Indian troubles after the Revolution.  Indian fighters Lewis Bonnett and Jesse Hughes were great-great uncles.  Her great-great-grandmother Margaret Bonnett Waggoner was killed by Shawnees in 1792, and her great-grandfather Peter Waggoner taken and raised among the Indians, not returning until 1812.  Only her mother’s mother’s family, the Balls, were latecomers from old Virginia, not arriving until after 1800.  They all converged in the Hacker’s Creek area, now Jane Lew and McWhorter.  Her parents, Walter and Rulina Waggoner Stalnaker, moved to Roane County in the spring of 1875, along with most of his siblings and her sister Virginia, who was married to his brother George.  Elizabeth Ann was 12, the oldest of 7 children; three more were born in Roane County.  After her death, her parents moved on to Calhoun County.

I have hiked Sugar Run from childhood, camped out there in a tent by myself one summer.  I have a necklace my father made with a bit of sandstone from the house foundation, the only trace of the farm that once was.  I’ve slept in her bed for 25 years, a black walnut four-poster with a high headboard, carved by a local carpenter.  My children slept in her cradle, the one my grandmother slept in.

But this picture and those few facts are about all I know about her.  I don’t know whether she was a Liz or a Betsy; probably not a Liza or Beth, from the nicknames that were common then.  My other great-grandmothers were called Molly, Jane, Anna.  In my mind, this one is always Elizabeth Ann.